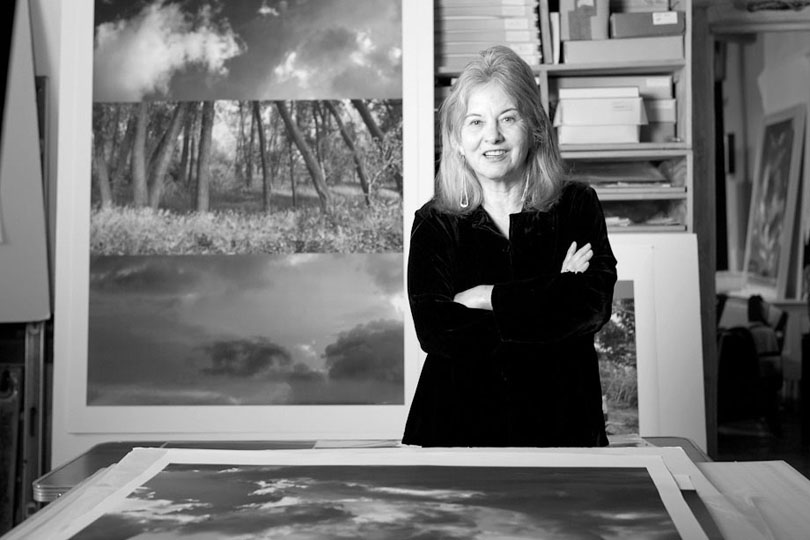 American artist Meridel Rubenstein began her professional career in the early 1970s, evolving from photographer of single photographic images to artist of extended works, multi-media installations, and social practice. Her artwork has been exhibited in art galleries and museums, because of its scale and mixed media.

Upon turning 70 in 2018, Rubenstein celebrated with four large public exhibitions spanning the past 25 years of her practice. This included works from her atomic series Critical Mass, as well as her installation Oppenheimer’s Chair, which was commissioned for the first Site Santa Fe International Biennial in 1995 (on the 25th anniversary of the initial atomic test at Trinity); as well as her newest work, a three-part series titled Eden Turned on Its Side. The latter focuses on intersections of nature and culture in relationship to ecological and social imbalance, beginning with Photosynthesis on a farm in Vermont, expanding globally to the Volcanoes of the Ring of Fire in Indonesia, and finally to the site of the original Garden of Eden in Iraq.

Eden in Iraq is also Rubenstein’s water remediation/art project in the wetlands of Southern Iraq, using environmental design and wastewater to make a restorative garden for health, cultural heritage, and environmental education. UNESCO’s 2017 designation of these Mesopotamian Marshes as a World Heritage Site is enabling the needs and benefits of this ancient ecological and cultural jewel to be brought to the world’s stage. Funding hopefully scheduled in 2021 by the Iraq Ministry of Water Resources is making the Eden in Iraq Wastewater Garden a reality. In October 2020, the Eden in Iraq Wastewater Garden Project, was chosen as one of 100 projects for UNESCO’s Green Citizens Initiative.

In 2021, two of Meridel’s photographs – Penitente and Fatman with Edith – were added to the Museum of Modern Art [MOMA] photography collection as part of the Helen Kornblum Collection of Women Photographers as seen in the book and exhibition THE DEFINING EYE.

Exhibitions in 2018 included exhibitions at the University of New Mexico Art Museum, the New Mexico History Museum and Currents New Media Festival in Santa Fe, along with an exhibition at the National Design Centre in Singapore, and three gallery exhibitions in the US and Singapore. and a new monograph Eden Turned on Its Side.

Meridel Rubenstein maintains her art studio in Santa Fe, New Mexico. She has been an active arts educator for over 30 years. From 2007-2018, she was a Visiting Associate Professor at the School of Art, Design, and Media at Nanyang Technological University in Singapore. From 1990-95, Rubenstein was the Harnish Visiting Artist at Smith College, in Northampton, Massachusetts. She has created photography programs at the College of Santa Fe (1976-80) and the Institute of American Indian Arts in New Mexico (1990-96) and directed the Photography Program at San Francisco State University in California, the oldest Master of Fine Arts program in the USA (1985-90).

Rubenstein has exhibited internationally including the Louvre in Paris and the Irish Museum of Modern Art in Dublin as well as in numerous gallery and museum exhibitions. Her works are in prominent collections including the Museum of Modern Art in New York, National Museum of American Art in Washington, the San Francisco Museum of Art, and the Museum fur Kunst und Gewerbe, Hamburg, Germany. She is represented in San Francisco, CA by Brian Gross Fine Art.

Meridel Rubenstein has received fellowships from the Guggenheim Foundation and the Bunting Institute at Harvard University, awards from the National Endowment of the Arts as well as the Pollock-Krasner and the Rockefeller Foundations. She was educated at Sarah Lawrence College in New York and did special graduate studies at M.I.T. with the eminent photographer, Minor White. She received an M.A. and M.F.A. from the University of New Mexico, Albuquerque, in 1974 and 1977, where she studied with noted art and photography historian and museum directors Beaumont Newhall and Van Deren Coke. Her MFA Dissertation: The Circles and the Symmetry-The Mutual Influence of Georgia O’Keeffe and Alfred Stieglitz.

In October 2004, BELONGING: Los Alamos to Vietnam, Photoworks and Installations, was published by St. Ann’s Press in Los Angeles. This major monograph of twenty years of her work, includes texts by environmental writer Terry Tempest Williams, cultural theorist Elaine Scarry, and renown art writers James Crump, Lucy Lippard, and art and cultural critic Rebecca Solnit. Solnit has written of Rubenstein: “A consummate maker of metaphors, an artist who can never talk about only one thing at a time, but speaks of things in relationship, of lives to landscapes, of corporeal location and homing in terms of labyrinths and minotaurs, of bombs in terms of other myths, of physicists in relationship to pueblos.”

In February 2018,  Rubenstein’s monograph Eden Turned on its Side (2009-17) was published by the University of New Mexico Press with  essays by curator,  photography and cultural historian Dr. Shawn Michelle Smith, and award winning environmental writer Alan Weisman. William Fox, Director, Center for Art + Environment, Nevada Museum of Art has written of this work: “Meridel Rubenstein is a photographer whose domain includes sculpture, landscape design, architecture and earth systems science. She does not merely document the world, but seeks to save it.”