Poet Charles Olson advised his colleagues to think in terms of millennia, setting their local coordinates of place and history in the proper perspective. Photographer Meridel Rubenstein goes one better with her embrace of geological “deep time” embedded in Indonesian volcanoes. Part of a larger project, Eden Turned on its Side, the imposing digital photo works from The Volcano Cycle at Brian Gross unite science, religion, and art. Based in New Mexico, Rubenstein extends the work of Georgia O’Keeffe, who invoked local spiritual traditions in her images of arid landscapes. Likewise inspired by the photographs of Alfred Stieglitz, she combines the close-up with the distant, finding cosmic implications in the infinite depth of the perceptual world. 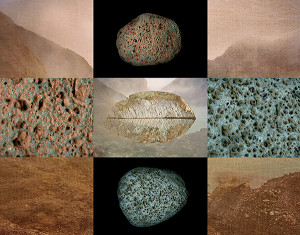 Rubenstein documents volcanoes in the “Ring of Fire,” centered on the island of Java, whose eruptions have impacted global history. Working with researchers from Singapore, she was able to visit these remote, sublime landscapes and record the life process of the earth in stark images of rocks and skeletal leaves, which she collaged and combined digitally. Most conventionally composed is her image of Kawah Ijen’s crater, which contains a lake of sulfuric and hydrochloric acids that wafts toxic mists across its blue-green surface, surrounded by barren brown walls. One is brought back to the age of eighteenth century explorers, to the origins of the sublime, yet Rubenstein’s photos are mounted on aluminum panels in a process of dye sublimation that lends them an industrial character. There’s a mirror glare that’s initially off-putting, yet traces of buffing on the surface echo the worn geological surfaces of the subjects themselves; the metallic images resemble daguerreotypes and connect us to the history of science and photography, to the sober ritual of recording natural phenomena that extends further back, to the dark mirror and alchemy.

These connections help distance Rubenstein’s work from National Geographicphotojournalism, and link her to the American landscape tradition, to the rhetorical visions of Stieglitz and O’Keeffe. Images like Between Heaven and Earth, Mt. Bromo Volcano, E. Java (2011) recall O’Keeffe’s juxtapositions of bones to encircling mountain peaks, while Re-emerging Grass, Mt. Bromo Volcano, E. Java (2011)is vintage Stieglitz, with its powerful textural effects. Stieglitz felt that a high-resolution camera could unlock the subconscious, and Rubenstein’s sprouts of grass evoke subterranean forces that convey deep conviction. 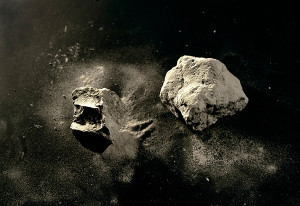 Trained under Arthur Wesley Dow in the Japanese principle of notan, or design in dark and light, O’Keeffe quickly assimilated the close-up concentration of Stieglitz’s prints in her semi-abstract paintings, creating images through which nature itself seems to speak. Rubenstein’s Ring of Fire (2011 – 13), a digital collage of enlarged stones and skeletal leaves, extends O’Keeffe’s use of suspended objects, often of religious significance, with which she gave more literal voice to her landscapes. It resonates with contemporary works like photographer Catherine Wagner’s virtual cabinet of curiosities from the San Francisco Academy of Science, or Peter Campus’s enlarged projections of pebbles.

If Wagner maintains a scientific stance, and Campus engages with metaphor and irony, Rubenstein employs her digital enhancements to amplify the rhetorical urgency of her landscapes. In Mt. Bromo from Above Encircled (2011) she’s inserted a circular window, a dramatic spotlight that she identifies as a mandala—like one of O’Keeffe’s suspended spiritual objects but generated here by modern technology. With dramatic effects of light, Rubenstein conjures up a mixture of science and religion, investing the eruption of the earth with magical power. Technology penetrates our landscapes; the computer is our own dark mirror, and its seductive layers can undercut the tactile authenticity of darkroom photography, the “that-has-been” of Roland Barthes. Rubenstein’s effects are magnificent, yet by emphasizing her image’s dematerialized surface they also render the mute spectacle of the mountains more remote. There’s deep magic also in the more modest and straightforward Mt. Toba Volcanic Ash, 74,000 yrs old, found in Malaysia (May 2010), where forms seem to interact on their own. Here, an internal dialogue between two objects—almost fleshy in their textural density, with mouth-like orifices and rich variations of surface and tone—engages us psychologically without specific connection to larger issues. 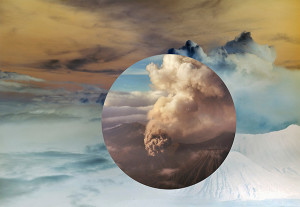 Arguing against big ideas, Charles Olson favored works based in the specifics of place. But big, urgent issues need to be raised, and Rubenstein’s work must be seen in the overall context of Eden Turned on its Side, where her appeal to the science of photosynthesis and to the shared religious tradition of the garden establish a rich, multifaceted overview of our situation in nature. In another phase of her project, Rubenstein is working to restore wetlands on the (now threatened) Euphrates River. There, she grapples with the nuts and bolts of environmental change, redefining Stieglitz’s “local” for our age of global mobility, while here, small fragments of ash speak for the earth itself.