Eden Turned on its Side: Photosynthesis, Part II at David Richard Gallery until June 21, 2015

Please join me for the second presentation in a multi-part series of exhibits that focuses on intersections of nature and culture in relationship to ecological and social imbalance. The show continues through June 21, 2015. Deepest thanks to all of you who came to the opening! 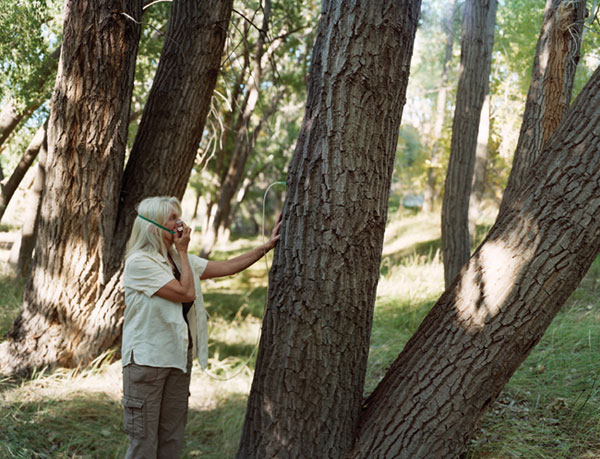 This is the second presentation in a multi-part series of exhibits that focuses on intersections of nature and culture in relationship to ecological and social imbalance.

July 16th, 1995, the 50th anniversary of the first atomic test at Trinity in S. New Mexico, also marked the opening of the first Site Santa Biennial-Longing and Belonging from the Faraway Nearby curated by Bruce Ferguson. Because of previous work in the collaborative exhibition Critical Mass, I was commissioned to mark this date with a new work –  the glass\photo\video\installation Oppenheimer’s Chair. Glass studies resulting from this piece are part of the current exhibition.

20 years later, and the 20th anniversary of Site Santa Fe and 70th of the Trinity Test, I have continued to make photographic works that allude to the power and intelligence in nature and the ecological and social imbalance that has followed Trinity.

This exhibition looks back and forwards presenting works that span over 20 years.  Pieces from Critical Mass, Oppenheimer’s Chair, Joan’s Arc, and Millennial Forest, provide a foundation for my current project Eden Turned on its Side, with selections from Photosynthesis, The Volcano Cycle and Eden in Iraq.
Please see my website: davidh280.sg-host.com for more information.

I have been asked to consider donating this piece to the Nevada Museum of Art in Reno that is the only museum dedicated to collecting environmental artworks  referencing  the desert landscape in  North, Central, and South America as well as in Australia.   Oppenheimer’s Chair had been stored for 20 years and has needed some refurbishing. So I’ve use this potential opportunity to uncrate and restore the piece.

When not teaching in Singapore, I live and work  in Santa Fe. I’ll be in New Mexico until early August.