Eden Turned on its Side 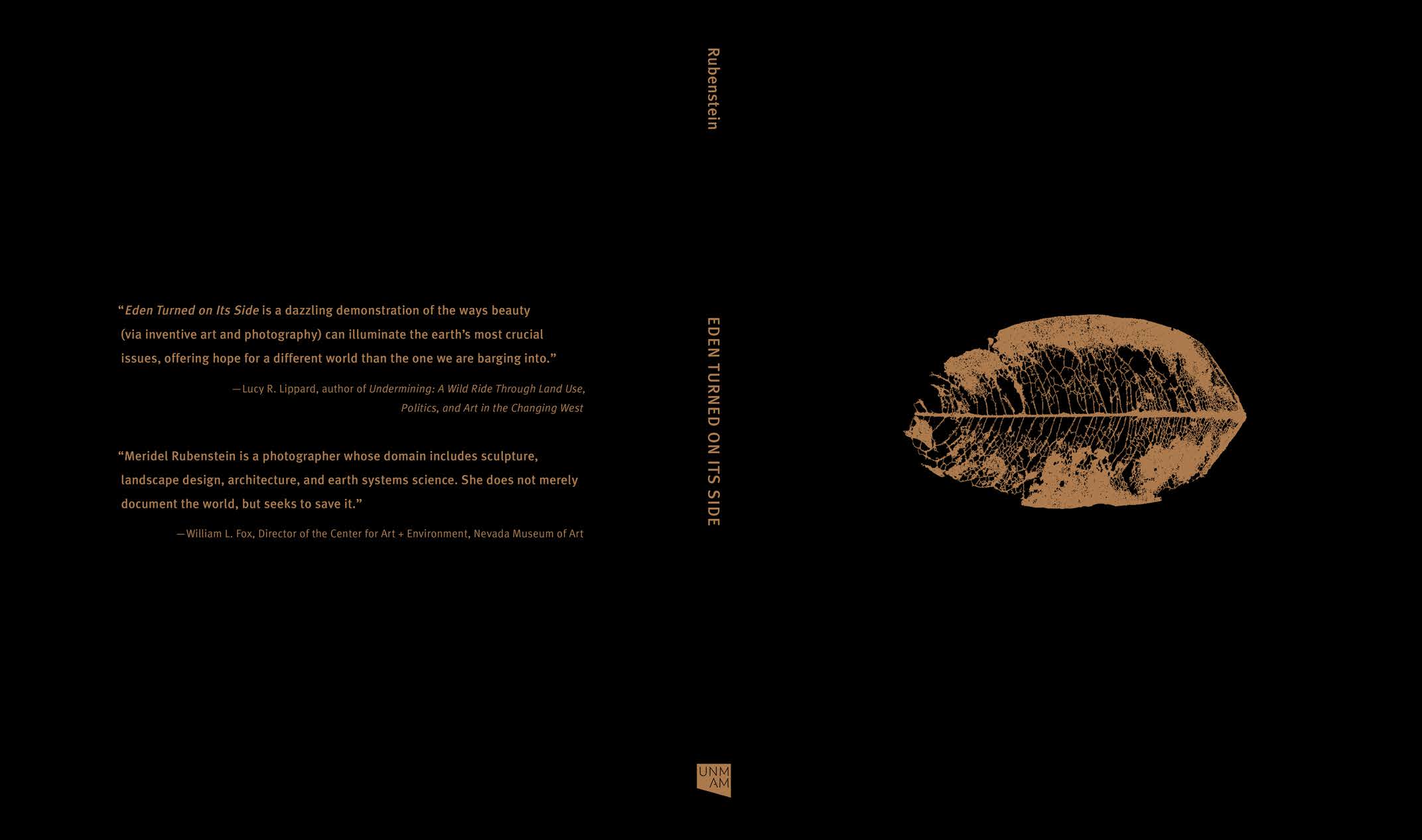 Somewhere between our own culturally specific creation myths and the Big Bang, our planet was born. 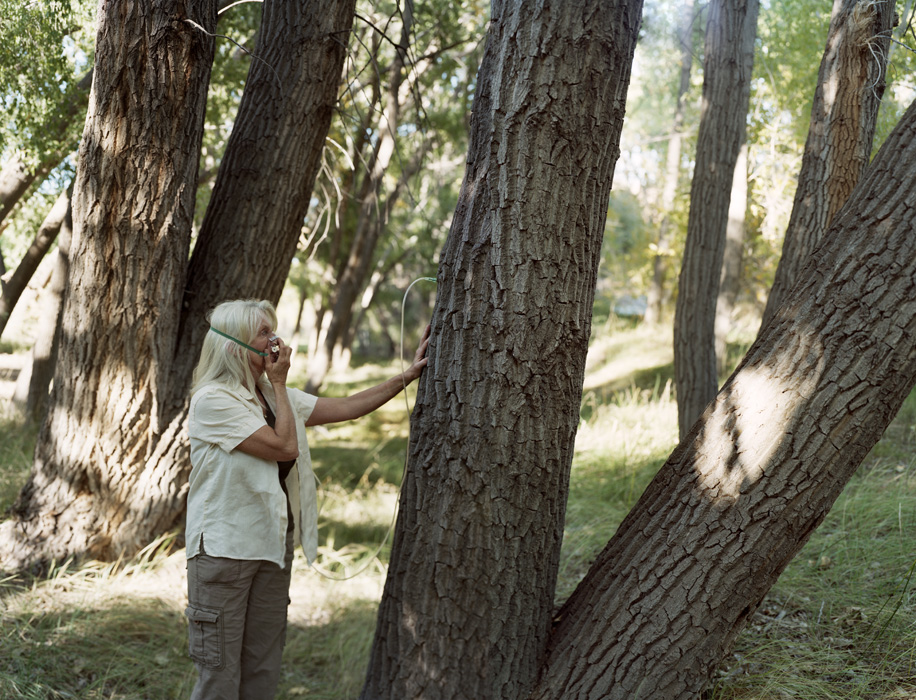 Out of nothing, into something; out of darkness, a first breath.

>Out of nothing, something.

For eons, the ocean of our atmosphere has cradled

us. But now, as it thins from carbon emissions and hydro-fluorocarbons, it may not be able to provide life support to our earth. Upon this planet, lots of things are upside down. Photography allows particles of light to illuminate our present reality, upside down and backward, onto our retina, a piece of film, or a digital light-recording system. It’s the artist’s job to turn things right-side up in a different way.

Photosynthesis is the predominant light-recording system that sustains life on earth. Sunlight converts Co2 into sugars, releasing energy and nourishment mainly for plant sources known as phototrophs. A by-product of this process is respiration whereby plant sources exhale oxygen that we anthropoids inhale while exhaling Co2 for plants in return. Is it possible to restore any balance between oxygen and carbon, between we humans and the natural world? Or are we prisoners of global greed that is robbing us of our Edenic right to clean air, soil, and water?

This Post-Edenic symbiotic exchange is the subject of this work.

The Volcano Cycle explores deep time with photographic images of volcanoes from Indonesia’s Ring of Fire. These evoke earth forces, climate change, and human coevolution. Large-format negatives have been printed digitally on prepared aluminum plates with archival pigment inks through either the dye sublimation or direct pigment printing processes. The metal echoes the deep timbre of the eruptions, as well as the transmutation of materials, minerals, and metals that occur during a volcanic event.

After eons of fire and ice and then melt, our Eden emerged. Without the earliest volcanic activity, enough carbon dioxide would not have been released to produce global warming to melt the ice cover. Oxygen could then arise to eventually breathe us into being.

Mount Toba erupted on Sumatra seventy-four thousand years ago, creating an extreme volcanic winter that extincted, if not all of us, then a large portion of life. It is possible that some of us, who were lucky enough to have made tools, were able to crawl out of the deep ash, to keep going. Thus Mount Toba is referred to by scientists as the “Weak Garden of Eden,” because, at least at Mount Toba, life had to begin anew.

Volcanoes made it possible for life to exist on Earth.

They enable us to see the beauty of the great natural forces of the planet—of which we are part. They offer a window into both our own evolution and participation in global warming. I want people to see how alive the Earth is without it being terrifying. These pictures are the opening of a conversation.

In 2010, in the midst of creating both Photosynthesis and Volcano Cycle for Eden Turned on Its Side, I learned about the valiant efforts of the Iraqi Environmental NGO, Nature Iraq, to restore the vast drained Mesopotamian marshes of southern Iraq. The Tigris and Euphrates Rivers cross on the eastern edge of the marshes, so these wetlands are thought to be in extreme proximity to the original historic site of the Garden of Eden.

The marshes are home to the Marsh Arabs, who lived an unchanged way of life here for over seven thousand years, until the early 1990s. Then, when Saddam Hussein drained and burned the wetlands to punish Shi’ite rebels hiding there, they were murdered or driven out. With Sadam’s demise in 2003, people started returning, with simple hand tools, to break through the earthen canal and let the waters back into the desiccated land. Azzam Alwash, an engineer from Laguna Beach, California, immediately returned to the nature preserve of his childhood. He created Nature Iraq with the mandate to help restore and preserve Iraq’s endangered waters, flora, and fauna.

Despite progress, the situation is far from perfect—with people now building on land instead of on waterways, the Euphrates has become dangerously contaminated with human sewage. I initiated the Eden in Iraq project in 2011 to create a demonstration wastewater garden that will restore health and grow beauty in the devastated marshes of southern Iraq.

These images are made to resonate, both conceptually and in a material sense, with the other two parts of Eden Turned on Side—Photosynthesis and Volcano Cycle—and to remain companions to the Wastewater Garden Project. Our garden design is based on Mesopotamian wedding-blanket patterns. The images presented here are configured as weavings in the sense that different themes are being woven together: nature, culture, environmental and cultural history, and more. Here linen, tapestry, and metal are employed to give a sense of the fabric of life in the marshes.

LINK TO ESSAY “TENDING THE GARDEN” BY DR. SHAWN MICHELLE SMITH, FROM THE MONOGRAPH EDEN TURNED ON ITS SIDE 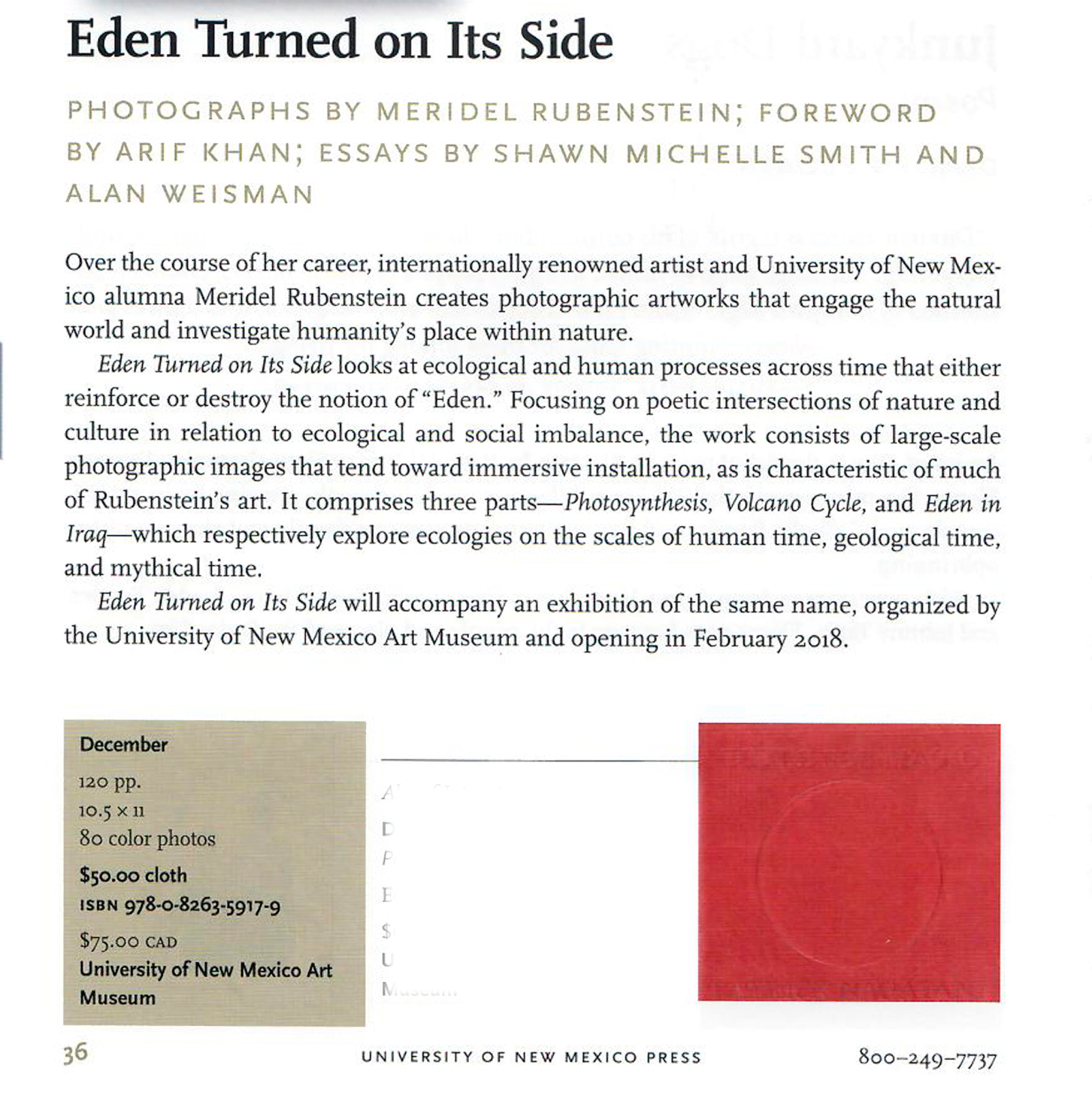