Meridel Rubenstein: Heaven Turned on its Side: Photosynthesis at Brian Gross Fine Art

Heaven Turned on its Side: Photosynthesis 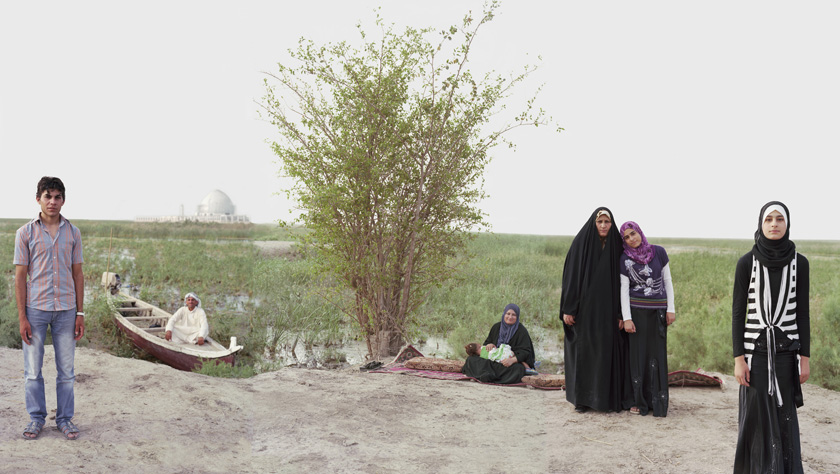 In Heaven Turned on its Side: Photosynthesis, Rubenstein photographed people and trees at each solstice and equinox during the different stages of photosynthesis. In investigating the exchange of oxygen and carbon dioxide throughout the seasons, Rubenstein utilizes photosynthesis as a means to expose current ecological and social imbalances. Set against a post-Edenic world, the work emphasizes that survival is dependent upon a balance between conservation and human development.

In the second part of this series, Heaven Turned on its Side: The Volcano Cycle, Rubenstein photographed volcanoes from Indonesia’s Ring of Fire. The image of the volcano as symbol for life before human beings, conjures up ideas of earth, climate change, and human evolution. The third part of this series, Heaven Turned on its Side: Eden in Iraq, is a proposed wastewater art garden to be created in 2013 in the damaged S. Iraq marshes in proximity to the probable historic site of the Garden of Eden. Utilizing preconceived notions of Eden as the universal concept of paradise, Rubenstein investigates the inevitable destruction of Eden, drawing on the reality of the destruction caused by the war in Iraq. Rubenstein remarks, “to really restore Eden, recognition of waste must be included to make things grow. These small steps of purification and re-greening lead us back from the brink of ‘desert-ification.’”

Rubenstein was born in Detroit, Michigan in 1948. Well known in the photography community, She received an MA and MFA from the University of New Mexico, Albuquerque. Since 2006 she has been a Visiting Associate Professor at the School of Art, Design, and Media at Nanyang Technological University in Singapore where she teaches Installation Art and Art and Ecology. From 2000-2005, she was the Harnish Visiting Artist at Smith College, Northampton, MA and from 1985-90, she headed the photography program at San Francisco State University. Her work has been the focus of numerous gallery and museum exhibitions throughout the United States including Site Santa Fe, New Mexico, the Museum of Contemporary Photography, Chicago, the List Center for Visual Arts, MIT, Boston, the Smithsonian Institution, Washington, DC, the Museum of Fine Arts, Houston, the San Francisco Museum of Modern Art, among others. She currently maintains a studio in Santa Fe, New Mexico. Last spring her well known Lowrider images from 1980 were shown at the Louvre in Paris.

For more information or visuals, please contact: Charlotte Miller, Assistant Director, at (415) 788-1050 or