THE Magazine: Meridel Rubenstein – Eden Turned On Its Side

by Richard Tobin
original article here:
Meridel Rubenstein: Eden Turned On Its Side

And Cain went out… And dwelt in Nod, the land east of Eden.

Meridel Rubenstein makes inspired use of Adam and Eve as a visual conceit in Eden Turned on its Side, a large three-part photo installation about “intersections of nature and culture in relation to ecological and social imbalance” (gallery statement). Part two, Eden in Iraq, anchors part one’s earlier tree studies (Photosynthesis), from the 1990s, and the grim, gorgeous imagery of part three, The Volcano Cycle, from 2012. What unifies all three projects in Eden Turned on its Side is the artist’s concern with “ecological processes across time that either reinforce or destroy the notion of Eden” (gallery statement).

The Garden of Eden is a timeless literary theme, the archetypal “locus amoenus,” a lovely place of sensory delight—especially visual—a woodland, pasture, orchard, an enclosed park: Paradise. The actual context for the Eden in Iraq series is the Mesopotamian marshlands of southern Iraq, believed by some scholars to be the biblical site of the Garden of Eden. Eden in Iraq features two photographic prints that draw upon the Eden theme: Adam and Eve in La Cienega, USA and Adam and Eve in S. Iraq Marshes (The Al-Asadi family in the Garden of Eden). In each print, a man and woman stand on opposite sides of a tree in the center, forming three vertical bands against a broad horizontal backdrop—a northern New Mexican orchard in the first print, a marsh in the Iraqi image. Both prints deploy the Adam and Eve motif from European (especially Northern Renaissance) art depicting the biblical pair flanking the Tree of Knowledge (see van Eycks, Dürer). The composite motif of Adam, Eve, and Tree is a visual metonymy for the Genesis account of mankind’s precipitous fall from grace and expulsion from Paradise. In a kind of shorthand of the Eden narrative, this iconic motif was often reduced to just Adam and Eve, as seen, for example, on opposite end panels of triptych altarpieces that, when closed, joined the pair in a diptych. 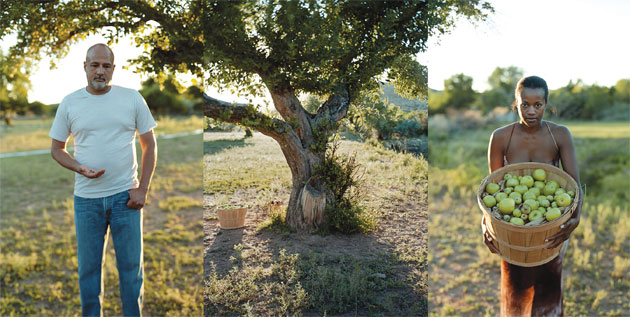 But here the artist opts for the full motif, thus stressing the centrality of the Tree, a reference to mankind’s ruin of its idyllic environment. The choice links Photosynthesis with the actual inspiration for Eden in Iraq, a water remediation art project in the vast wetlands of southern Iraq—“the cradle of civilization”—that Saddam Hussein began to drain in 1991, rendering it a virtual desert by 2000.

Yet Rubinstein’s image of a modern-day Adam and Eve—revived in the Iraqi marshes and reprised in the La Cienega orchard—belongs to the broader theme of the installation itself. The photo images of Eden on its Side dramatize the critical confluence of nature and culture in an era of drastic climate change, by means of this abiding parable of the Garden—where Adam and Eve were able “To see the world in a grain of sand” (William Blake, Auguries of Innocence), the paradise lost where our first parents tread
tentative and briefly “Down the passage which we did not take / Towards the door we never opened / Into the rosegarden” (T.S Eliot, Burnt Norton). Here, Eden is not a symbol of redemption, it is a portent of survival.

“Seeing heaven in a grain of sand is not a trick only poets can accomplish.” So wrote cultural anthropologist Clifford Geertz in his landmark 1977 study, The Interpretation of Cultures. Rubenstein’s global view of culture “in relation to ecological and social imbalance” reflects Geertz’s redefinition of culture. Geertz displaced anthropology’s governing principle that sought to both posit culture as more than mere “outer garb” and at the same time, by espousing its application to culture, salvage the Enlightenment view of a “universal” human nature. Geertz rejected such “cultural universals” as empty categories and directly embraced cultural diversity— “the enormous variation in human behavior”—for its capacity to reveal what it is to be human. He did so fully aware of the attendant risk of cultural relativism: “To take the giant step away from the [Enlightenment] view of human nature is . . . to leave the Garden.”

Merging art and ecology, Eden on its Side affirms the argument for culture as critical to human survival: “There is no such thing,” wrote Geertz, “as human nature independent of culture,” culture that he defined by “systems of significant symbols (language, art, myth, ritual).”

Rubenstein’s Adam and Eve are as much at home (or displaced) in the orchards of northern New Mexico as in the marshes of southern Iraq, in a deep forest, or beneath the volcanic Ring of Fire. The import of Eden on its Side is both hopeful and sobering. “We are stardust / We are golden / And we’ve got to get ourselves / Back to the garden.” Yet, like the wetlands of southern Iraq, our ecosystem will never be fully restored to its pristine innocence, thanks to the corporate Cains who dwell in the land of Nod. And as long as human behavior, for all its diversity, fails to fully grasp our own irreversible impact on nature, then we, also, like Cain, doom ourselves to dwell east of Eden.